There was a small but determined Harriers contingent taking part in one of the first major fell races in the Peak District Calendar last Tuesday night. Outnumber by the ladies for once, myself, Lindsay Cuthbertson and Sarah Haynes braved the fells for a midweek adventure, with prime cheering and coat holding duties falling to Amanda Carter. A breezy, but clear and generally warm night was encountered after finally emerging from the car after a battle with the evening traffic exiting Derby. Thankfully the late arrival was a blessing in disguise, as the usual queue out of the Fox House pub door for registration was virtually non-existent and the respective fivers were paid and we were in. The course of about 5.8m is a technical mix of short climbs and descents, concluding in a painful half mile of flattish hard-packed track to finish. The Burbage Skyline always attracts a good crowd and some seriously quick fell runners. I enjoyed the climbs and less so the descents (after the weekends Bob Graham Round exploits) and it was great was able to rekindle some of the friendly rivalry from the cross-country season with a number of chaps from Shelton Striders who had also made the journey up. Both Lindsay and Sarah had great races, particularly as this was their first fell race and with no prior knowledge of the course (…leading to a crazy sprint from Lindsay when she realised she was closer to the finish than first thought!). 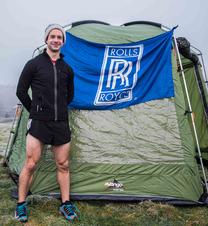 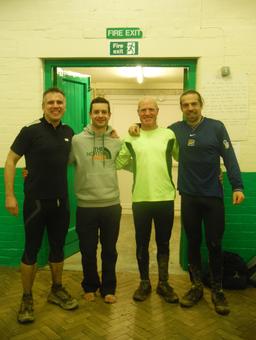 Sunday 25th January saw the running of the annual Wilmot Wander, a superb local running and walking challenge organised by the 27th Derby (Chaddesden) Scout Group following an undulating 32-mile loop of Derby. The Wilmot Wander route follows a mixture of field, tracks and canal towpath, resulting in a frequently muddy experience for entrants. The Rolls-Royce Harriers have always had good representation at this event over the years and 2015 was no exception. The Wilmot Wander competition (for team of 3 to 6 running together) was won by a team from the Harriers comprising of Robin Carter, Jon Kinder, Mark Fowell and Keith Covell after a strong performance by the team, particularly in the tough final stages along the canal path from Swarkestone to Pride Park. The team completed the course - on a mostly sunny and dry day -in 4 hours and 38 minutes. A second team of Rolls-Royce Harriers, Cliff Cooper, Allan Pollock and Bryn Hall also successfully completed the event.

Robin Carter is the male captain for the RR Harriers, and as such is a very keen and accomplished runner.  Throughout the years he has run many races, some of which may not be as well known as they should be.

Below are a number of 'reports' Robin has written regarding some of his favourite - less known - races.

​Robin is a very keen fell runner (as are a number of Harriers), so if you are interested in fell running get in touch with Robin.  Why not have a look on the Fell Runners Association website, http://fellrunner.org.uk