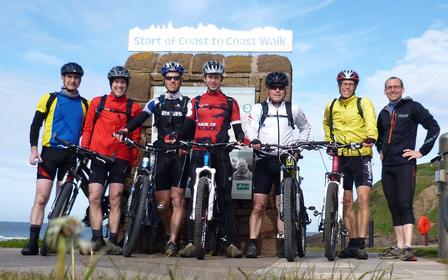 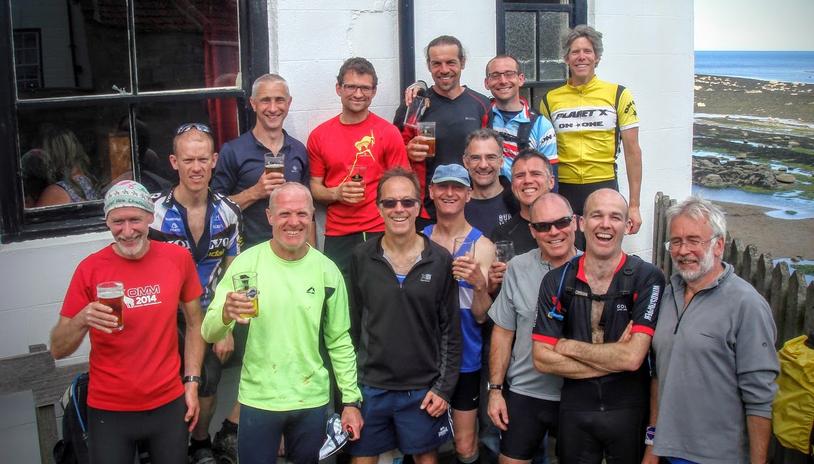 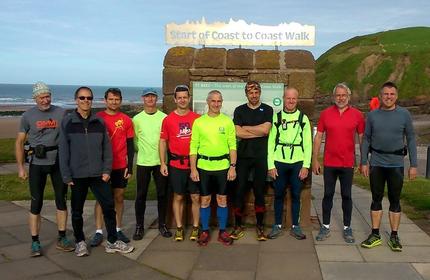 Coast to Coast, runners versus cyclists, a classic confrontation.  It is hard to find a better multi-day route where there is such a fine balance between the runners climbing skills on steep rocky terrain and the bikers superior speed on flatter sections of the trail. But who would win out overall after four hard days of racing?

To find out the answer over the period 4th to 7th June 2015 a team of 10 runners took on a team of 7 bikers. The runners followed Wainwrights classic C2C route. Both Jon Kinder and Bryan Carr ran the entire distance with the other runners running legs with them, providing support and driving the team minibus. The bikers followed a variation of the C2C route using permitted mountain bikes trails (some footpaths are off limits to bikers) and lacking van support also had to make detours to stopovers.

Post event both teams tried to claim victory. The runners got to the end point first whilst the bikers claimed a lower total time over the 4 days.

The final analysis of teams times showed that the runners took 42:13 to cover 186 miles whilst the bikers took 40:04 to cover 242 miles. These are elapsed times including stoppage times to refuel.

In Jon Kinder’s words. “It is hard to pin point who actually won, the bikers did more mileage as a consequence of them not having the facilities to move the whole squad using their van so they cycled to all of the stopovers but then consequently on the hardest day when we finished 1 leg down and added it to the next day, they took a short cut so on that score alone there is basis to proclaim the runners as victors. But they had a few falls and mechanicals and still made it to the end so I’m happy to call it a draw.”

What they can all agree on is that both runners and bikers had a great four days out on the C2C route in great weather.

Here are the two teams enjoying a post event pint or two together, rivalries forgotten!