Starting from the Cornwall / Devon county border on the north coast near Mead, the route follows the Cornish section of the South West Coast Path, a distance of 300 miles of running around the spectacular coastline of Cornwall to the county border on the south coast by Plymouth. To avoid the use of ferries or long detours inland we used a kayak to cross the five major river estuaries on the route, a distance of 6 miles of paddling. To complete the circuit we returned to our starting point on the north coast overland following the county boundary as closely as possible on minor roads, a distance of 56 miles. Because of time pressures we chose to cycle this last section overland instead of running.

​For our circuit which we completed in May 2009 we had 14 runners split into two teams (teams A and B) who alternated on a roughly 8 hours on / 8 hours off schedule so whilst one team was running the other was driving to the next team changeover point and getting some rest. As we often had 3 or 4 runners on each leg the total number of runner miles covered was 965 miles, an average of 69 miles each. Jon Kinder as usual managed to do far more than his fair share, clocking up 169 miles in total.

There are some big estuary and river crossings on the route which require either a big detour inland or use of a passenger ferry. Instead of relying on ferries, Stephen Turnough who is an experienced kayaker volunteered to cross the Camel estuary (Rock to Padstow), the Helford river, the Fal estuary (Falmouth to Cellars Beach), the Fowey river and the Tamar river, a distance of 6 miles in total including some night time crossings in his kayak. Stephen completed all the estuary and river crossings without any major problems as fortunately the water was not too rough and we got our timings right with regard to the tides. Before the event Stephen had contacted the local Falmouth canoe club for their advice on the Fal crossing, the biggest and most serious of all. As well as advice on the best place to launch at Falmouth and the time window with regard to the tides, they agreed to loan him one of the clubs sea-going kayaks for the 3 mile crossing and even turned out in force to accompany him safely across.

For the final cycling section Stephen swapped his kayak for a bike and accompanied Des Gosling and Todd Coxhead, our two other cyclists, for the 56 mile ride back to our starting point at Mead on the north coast. Then it was showers, clean clothes, food, plenty of beer and a good sleep before the long drive home.

For the most part we were blessed with fine sunny weather which made the whole exercise very enjoyable, even permitting some sun bathing between running, a far cry from the conditions experienced on the Pennine Way in 2007. The only exception was when Ian Page and Andy Swift were tackling one of the roughest sections of the route between Porthcurno and Lamorna Cove in the middle of the night when the rain came down in torrents. As the rest of us huddled under umbrellas waiting for them we became concerned when they were overdue. As usual in these circumstances there was no mobile phone signal but they completed the leg safely and Andy's language as he handed over the baton illuminated a very dark night! 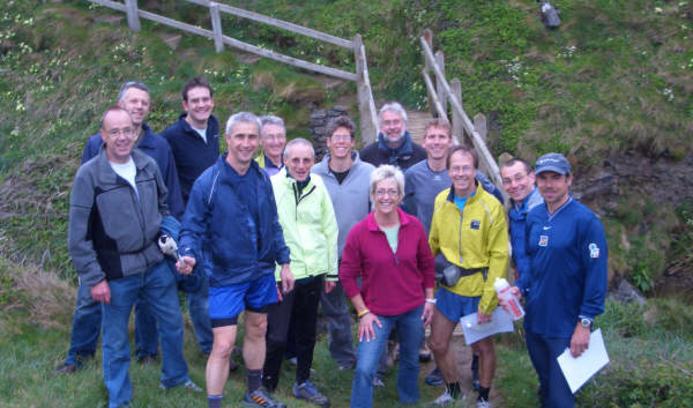 The team at the start of the Circuit of Cornwall on the north coast near Mead.
The wooden bridge marks the actual county boundary between Devon and Cornwall.

Circuit of Cornwall Relay Challenge 1-4 May 2009