The Cleveland Way, a national trail, is a route of great contrasts. The first half of the route starting from Helmsley crosses wild and rugged heather covered moorlands along the edge of the North York Moors before meeting the coast at Saltburn-by-the-Sea. From there the route follows the North Sea coast  through delightful towns and villages such as Stathes, Robin Hood’s Bay, Whitby and Scarborough before finishing at Filey Brigg.

We had two RR Harriers contenders intent on doing the full distance but at different paces. This was resolved by having two teams starting at different times aiming at a common finish.  First out of the start gate would be team A: Allan Pollock running on a 36 hour schedule supported by Stephen Turnough, Malcolm Marchant, Steve Leach, Bev Marchant and John Thornhill. Starting later would be Team B: Jon Kinder running on a sub 24 hour schedule, a very fast time for this event, supported by Andy Swift, Des Gosling and Julie Smith. 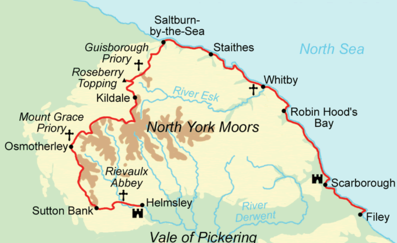 ​Team A stayed  overnight in Helmsley YHA before a 7:30am start on the trail. Team B didn’t start until 2:15 in the afternoon but running at a much faster pace soon began knocking off the miles between the two teams. Team A held out in the lead until the North Sea coast but were finally overtaken at around 4:00am in the morning by the team B Kinder juggernaut.  Needless to say team B increased their lead to the finish at Filey Brigg where they clocked 23:02, possibly a record for the route at that time and almost an hour quicker than Jon’s 24 hour target time. Allan finished in 35:20 well within his 36 hour target so a double success.

Notable memories are the fantastic views from Sutton Bank and Roseberry Topping, brilliant stars in the dark night sky and perfect fish and chips from a stall by Scarborough harbour before the final stretches to the finish where we were joined by Ken Northard and Ray Thompson.​ All in all a very enjoyable and satisfying epic.

The finish of the Cleveland Way at Filey Brigg.

Roseberry Topping, a prominent hill on the northern edges of the North York moors, is a great view point.

110 miles from Helmsley to Filey Brigg

Our actual times and distances run are shown here.