​​The Cotswold Way is a National Trail covering 100 miles from Chipping Campden to Bath. The route follows the Cotswold escarpment through picturesque villages and past famous ancient sites.

The weekend chosen for the challenge started in torrential rain following weeks of summer drought which made many of the footpaths hard going. Ongoing improvements to the trail in some areas and lack of signage meant finding the correct route was difficult in places especially at night.

Jon Kinder ran the whole 100 mile distance in 24 hours 49 minutes including stops (his actual running time was 22:56). His supporters were Andy Swift and Alan Newby who each ran 50+ miles with him and Allan Pollock who drove through the driving rain and several diversions to turn up for 16 miles of night running. Julie Smith provided the all important road support in her car.

One spooky episode was passing though the site of the Lansdown battlefield (Civil War 1643) in the early hours of the morning. Jon reported it was eerily silent until he heard the sound of a musket being fired which set crows flying from the nearby trees.

Julie crashed her car whilst the runners were on the final leg but all made it safely to the end.

The best summary of the trip was probably that given by the receptionist at the YHA in Bath who asked, when Jon walked in, "Has he been in an accident?”  After much showering Jon still managed to go out on the town in Bath to drink 5 pints and take a huge curry on board before retiring to bed, somewhat tired. Another epic successfully completed!

Actual times and distances run can be accessed here.

Jon Kinder's report of the route can be accessed here. 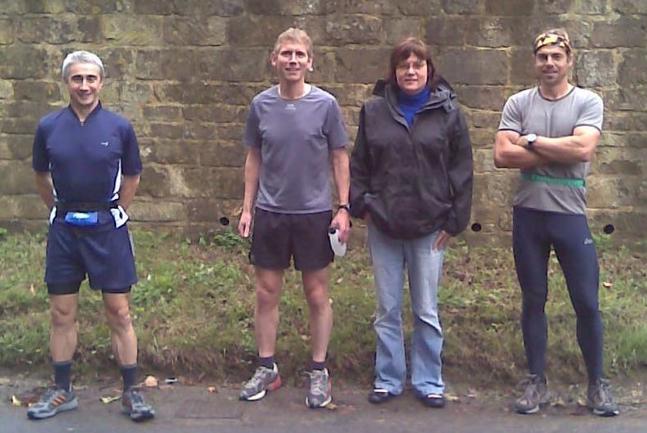