​View our actual times for the event (pdf file) 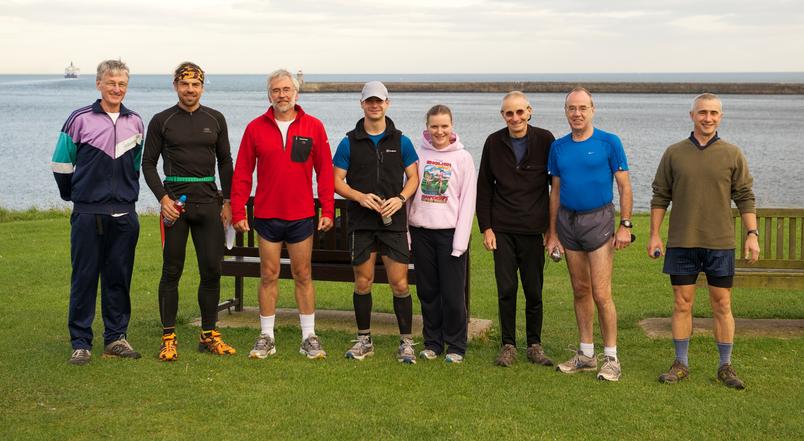 Starting from the North Sea coast at Tynemouth, the route initially follows a 6 mile cycle track by the banks of the river Tyne to join the Hadrian's Wall path at Wallsend. Hadrian's Wall path, which is a national trail, is then followed for 85 miles to its terminus at Bowness-on-Solway. The final 17 miles was planned to be on footpaths across mainly marshland to finish on the Irish sea coast at Silloth.

A team of 8 took part in the challenge which took place on the 23/24 September. Heavy traffic on the way north to Tynemouth in our hired minibus meant a late start to the challenge and night had fallen by the end of leg 2 in Newcastle. For the first 40 miles or so, although much of the route is gradually uphill, the paths were reasonably firm and easy to follow in the light of our headtorches.

Unfortunately our schedule meant the most scenic and hilly sections of the path between Wall and Carvoran, the only sections where the remains of the original wall and forts can still be seen, was traversed in the early hours of the morning. So if you want to see the best bits of the wall in daylight then you will need an early morning rather than a late evening start.

Whilst parked up at Mithroeum Fort at around 2am waiting for the incoming runners, we had a visit from the local police. After explaining what we were up to and once they had checked that the minibus wasn't full of ancient stones pilfered from the wall of the nearby fort (from their comments it would seem stones do get stolen on a regular basis) they wished us good luck for the rest of our trip.

Dawn broke on the descent from Carvoran and much of the rest of the route was across soggy farm fields in blustery showers. Despite the muddy conditions we made good progress and we were 39 minutes up on our original schedule by the time we reached the end of the Hadrian's Wall path at Bowness-on-Solway. However the late start still meant a late finish at Silloth putting the mandatory post-challenge team dinner and drinking session in hazard.So Plan B was hastily devised and put into action. The originally planned 17 mile finishing plod across the Solway marshes was replaced by 16 miles on minor roads run as a 8 by 2 mile solo sprint relay, which pulled back enough time to ensure that the essential eating and drinking session went ahead before last orders.

On this occasion no one completed the whole distance but Jon Kinder covered 86 miles before falling asleep at Bowness and Robin Carter covered 73 miles with the rest running sections with them and sharing support duties including driving the minibus. Actual running time excluding stops was 21:06, an average speed of 5.1 m.p.h. Including stops for food and drinks the total elapsed time was 24:17.