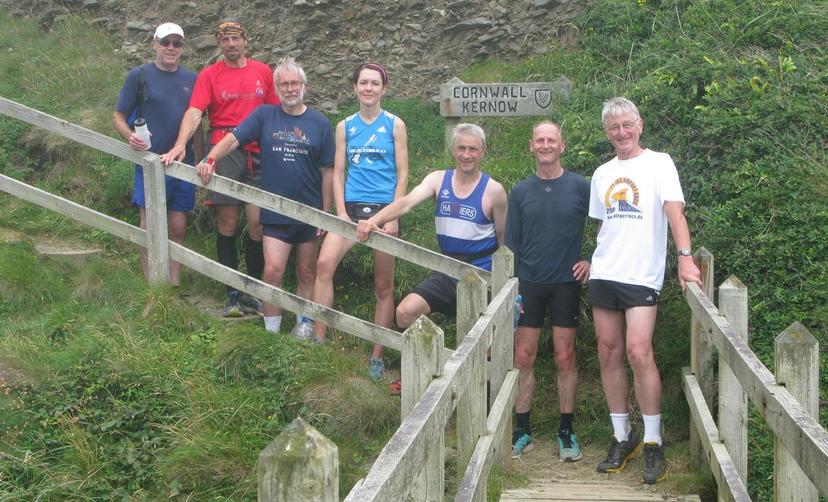 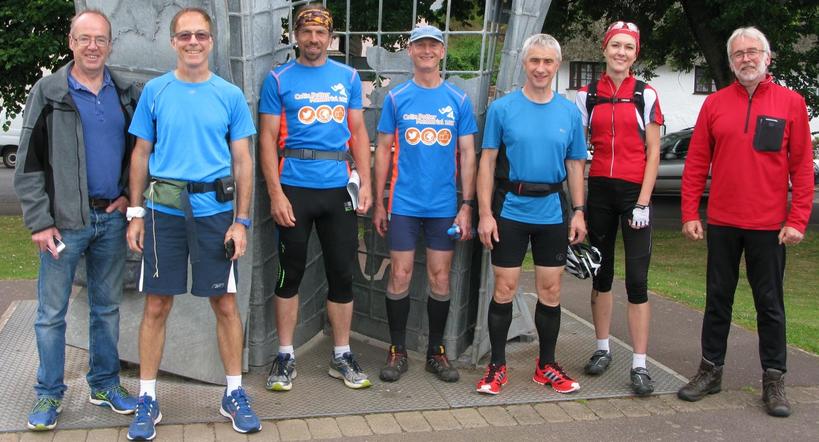 At the finish of the North Devon coast path at Marsland Mouth which marks the Devon / Cornwall border. This is the same bridge where we started our Circuit of Cornwall relay back in May 2009. Ian Page took the photo.

This summer’s long-distance epic was along the Somerset and North Devon section of the South West Coast Path, starting at Minehead and finishing at the Cornish border at Marsland Mouth, a distance of 114 miles. By setting off from Derby in a minibus at the crack of dawn on the Friday we were able to start the run at Minehead soon after 10am, and knock off the 40 miles to Ilfracombe by tea time. Fortunately the era of running through the night and sleeping in festering kit in the minibus is long behind us, and civilisation beckoned in the form of a shower, a meal and a few beers at the pub and a night in a backpackers’ hostel. Day two began with some more of the rocky cliff paths we had encountered on day one, but soon the terrain got distinctly flatter, as the path skirted the surfing beach at Woolacombe, crossed the remote wild flower haven of Braunton Burrows and ran for several miles along the Taw estuary. The 48 mile leg finished at the only town in England with an exclamation mark in its name, Westward Ho! So on Sunday it was westward ho from Westward Ho!, along some of the wilder parts of the south west coast, especially after turning the corner towards Cornwall at Hartland Point. The finish at Marsland Mouth was marked by a wooden footbridge over a stream, the same spot where our Cornish Coast relay had begun seven years earlier. Overall running time was 22 hours and 47 minutes, at an average speed of 5mph. And Jon Kinder ran it all.