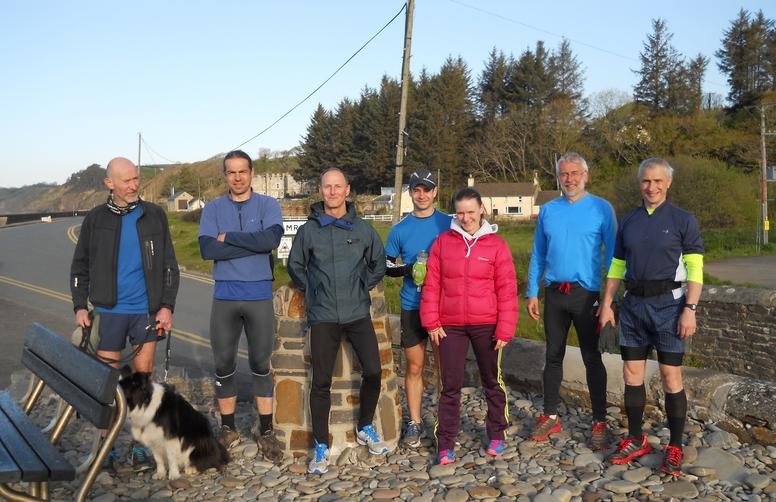 In a break from the tradition of club relays run non-stop both day and night, this summer’s epic along the 181 mile Pembrokeshire Coastal Path, a national trail around one of the finest coastlines in Britain, was spread over 4 days. Partly this change was forced upon us by only having 8 people taking part, not enough to support the non-stop relay tactics of previous epics. However this enabled the participants to “behave like normal human beings” in Jon Kinder’s memorable phrase, and sleep at night (after a good meal and a few beers!)

This change of approach didn’t shorten the miles to be run and though the 181 miles were spread over 4 days, they were still completed in just over 35 hours at an average pace of 5.1 mph. Jon Kinder, Robin Carter and Bryan Carr ran the full distance and the other members of the team covered between 52 and 124 miles plus support and minibus driving duties.

After an overnight camp near the start by Amroth Castle, Day 1 covered 55 miles from Amroth to Pembroke. Day 2 from Pembroke to Nolton Haven was 47 miles. Day 3 from Nolton Haven to Fishguard was another big day at 51 miles. This left just(?) 28 miles to the finish at St.Dogmaels before the long drive home.

Some may wonder why the official distance for the route is 186 miles and we only claimed 181 miles. The answer is there are some low tide alternatives you can take which involve some wading but better than taking inland road routes. We managed to cross both though one was touch and go on a fast rising tide.

It was an epic journey. The weather mostly kind, the scenery great. Even the long loop around Milford Havern past giant oil refineries has its own industrial interest, well worth another visit.