The Pennine Way, which runs from Edale in Derbyshire to Kirk Yetholm in the Scottish Borders, requires little introduction. It was the first UK national trail to be opened back in 1965 and remains one of the most famous. It has been run many times, both by individuals and as relays, in some outstandingly fast times.

Our main reason for running the Pennine Way as a club relay was to raise money for the charity Cancer Research UK. The inspiration came from John Thornhill, a previous club captain of Rolls-Royce Harriers. One of John’s long held ambitions was to get the club, which at the time primarily took part in road and cross-country type events, to run the Pennine Way for charity. By the time we did our relay run in 2007 John was suffering from mesothelioma (asbestosis) and though he was not well enough to do any running he did much of the organisation and came along as a supporter. Sadly John died in January 2008.

The Pennine Way was the first long relay run the club organised and we learnt a lot of valuable lessons along the way which helped us plan other long relay runs reported on this web-site. We chose to split the route up into 30 legs with an average leg length of 9 miles though some legs were as long as 15 miles. With hindsight we could have used more checkpoints to reduce leg lengths to help achieve a faster average pace and so a reduction in the overall time. Not all our relay handovers were as slick as they should have been, with on one occasion the incoming runners finding those supposed to be taking over still fast asleep!

However you can't plan for the weather and June 2007 was one of the wettest June months on record with twice the usual amount of rainfall leading to severe flooding across many parts of the UK. Much of the route was undertaken in torrential rain with extensive hill fog and a great deal of wading through bogs. However we finished it, everyone had a great time and in the process we raised a total of £6,700 for Cancer Research UK. 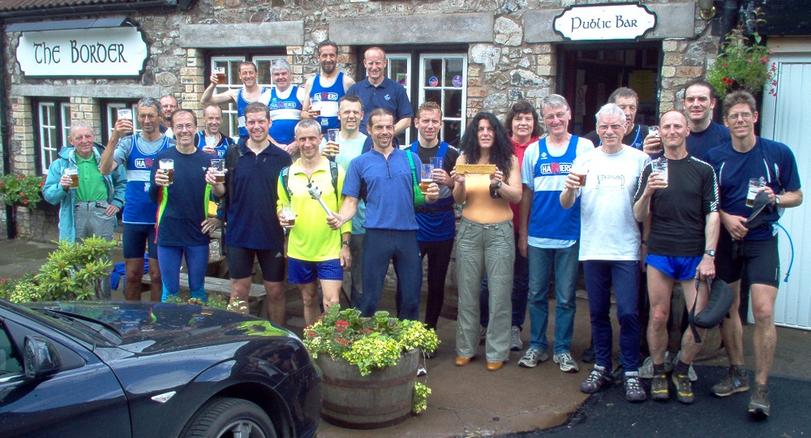