The choice of summer epic for 2018 was to complete the South Devon and Dorset coastal path, the remaining section of the South West coast path we hadn’t covered previously as a club, having completed the North Devon and Cornwall coastal paths on previous epics.

The remaining mileage to be covered was circa 200 miles excluding the optional circuit of the Isle of Portland. The plan as for recent epics was to run in daylight only with a proper stopover at night in decent accommodation with a nice meal and a few beers in a local pub rather than a non-stop relay format.

The team numbered 11 members though shortly before the off Jon Kinder declared he was unfit to run and brought along his bike instead.

The original plan, which was always a bit racy both pace and timewise, included running 16 miles from Plymouth on the Wednesday evening after a long drive from Derby.  A late arrival in the minibus meant the majority voted for a decent meal and early night instead of a very late night run so we missed out those sections.

The South Devon and Dorset section of the coastal path includes a number of estuary and river crossings. One estuary can be crossed on foot if the tide is right (which we did), the others all require either a crossing on a passenger ferry or a long drive around to the other side. It is also exceptionally hilly, packing in a total of 32,000 feet of ascent and descent.

These factors meant we missed out a few other sections of the route to ensure we finished at a decent time each day though the sections excluded were flat boring bits between the best bits of the run. In total we covered 153 miles over the 4 days. Bryan Carr completed the whole distance with Todd Coxhead and Matt Tomlinson both clocking over a 100 miles. Jon Kinder covered around 400 miles on his bike and even ran the last leg.

Durdle Door is one of many great features on the Jurassic Coast in Dorset. 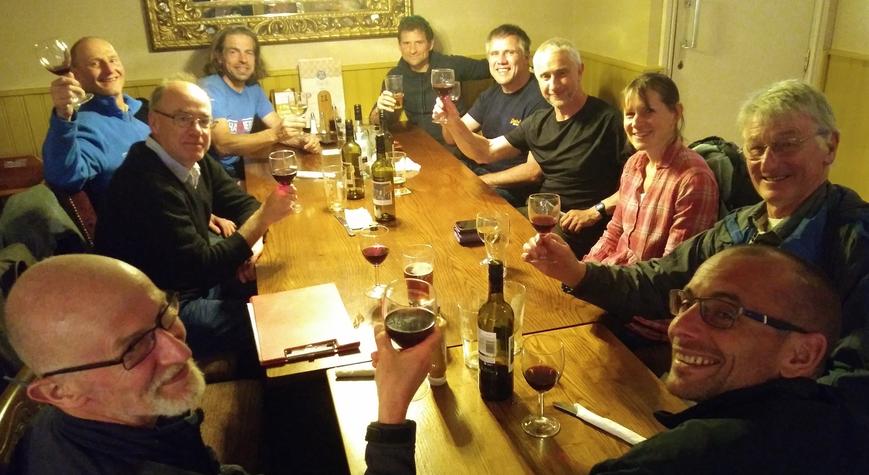