604 miles from Gretna to Dover

That is the end of the hills for some time as the next 110 miles utilises the canal networks with fast paced running along the towpaths of the Trent and Mersey, Coventry and Oxford canals. From Oxford the route follows the River Thames Path for 90 miles towards London before leaving the Thames at Weybridge along the 20 mile Wey Navigation to Guildford. The final 120 miles follows the delightful chalk hills of the North Downs Way through Surrey and Kent to the finish at Dover.

Although the terrain may not be as challenging as the Traverses of Scotland or Wales, the real challenge is in the distance and the ability to sustain a non-stop relay run for 5 days. 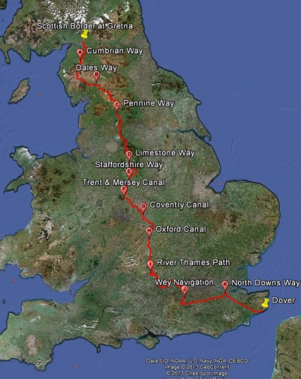 A joint team of Rolls-Royce and Congleton Harriers, comprising of 14 runners who took part over the whole route and a further 5 runners who took part on either the northern or southern sections, completed our Traverse of England over the five day period 28th April to 3rd May, the weekend of the Royal Wedding. We were blessed with good weather and with only a few minor navigational errors we managed to stick to our planned schedule to finish within our target time.

For this relay we arranged ourselves into 3 teams of runners, running on an approximate 6 hours on / 12 hours off schedule which provided more rest time particularly for those driving, an important consideration over 5 days.

However this change in approach prompted Jon Kinder, the clubs ultra long distance specialist, to come up with the idea of a 'challenge within a challenge'. The idea being that one member of each team would attempt to run all their team legs, an average of 40 miles per day each with only brief stops at each relay handover point to refuel. Bryan Lomas and Robin Carter took on the challenge. Amazingly both Jon and Bryan achieved their 200 mile targets and Robin got very close until the onset of injury on day 4 reluctantly forced him to miss out a few legs. So if anyone repeats the Traverse of England we would be very pleased to hear if you repeated the 'challenge within a challenge' as well (though it is not compulsory!).​ 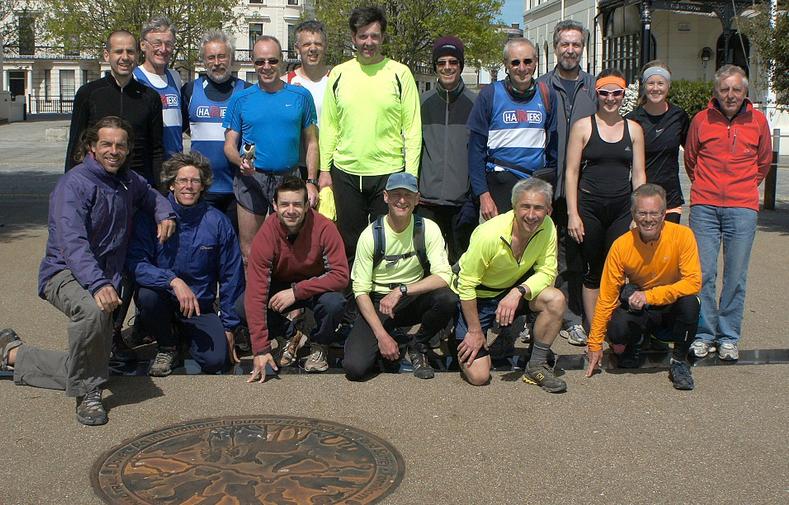