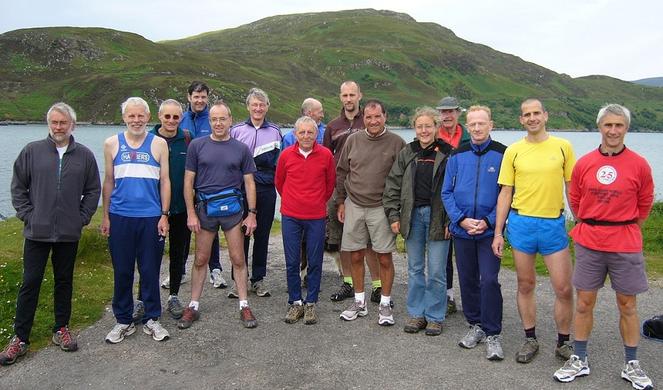 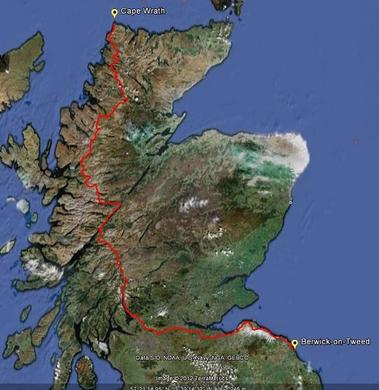 Starting from the remote Cape Wrath lighthouse, the most north westerly point on mainland Britain, the first 200 miles of this route follows the Cape Wrath Trail through the North West Highlands. More a description than a marked route, the Cape Wrath Trail traverses some rough and very scenic terrain. Don't be expecting any sign posts, it feels like a true wilderness in places. Towards the southern end the route takes a variant of the trail described by Cameron McNeish via the Great Glen Way to Fort William to avoid the use of ferries.

From Fort William the route follows the West Highland Way. Often described as Scotlands premier national trail, the West Highland Way is a great runners trail. Just north of its terminus near Glasgow, the route then follows part of the Central Scottish Way via canal tow-paths to Edinburgh before joining the John Muir Way, another national trail, around the coast of East Lothian. The last section follows the Berwickshire Coastal Path along the wild North Sea coastline to the finish at the English border just north of Berwick-upon Tweed.

A joint team of Rolls-Royce and Congleton Harriers, comprising of 15 runners plus Hollie the Collie, completed our Traverse of Scotland over the period 26-30 June 2010. Aside from one night of rain we were mostly blessed with decent weather. We had set ourselves a target time of 100 hours to complete this challenge and though we lost some time over the first two days on some of the tougher sections of the Cape Wrath Trail, we managed to pull that time back on the easier terrain in the south and we finished inside our target time despite a few cock-ups along the way (see reports below). In total we raised over £5,800 for the charity Cancer Research UK.

443 miles from Cape Wrath to Berwick-on-Tweed